Community Radio for the Grand Valley

A radio air talent since 1985, T. Jay Dexter has grown up on such historical AM stations like WIXY, WGAR, CKLW and WCFL in the Midwest -- just to name a few -- and has surfaced on radio stations over the years in Toledo, Canton Ohio and for a short stint in Montana. His love for the days of AM Radio in the 50s 60s & 70s, shows on The Vinyl Arkhives, going deep into the vaults for forgotten songs and artists, plus snippets of pop culture from the past via old radio jingles & airchecks, old commercials, and old TV clips. T, Jay is an avid fan of old (50's-70's) radio memorabilia, music and TV shows. He currently hosts "The Vinyl Arkhives" every other Wednesday Night on KAFM/88.1 FM in Grand Junction, CO -- which can also be streamed LIVE on the internet at www.kafmradio.org. 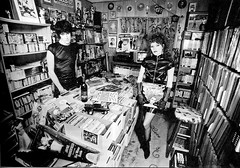