Dr. StrangeDub (Michael Rose) has been a DJ at KFAI-FM since 1996. The good doctor is the host of the Echo Chamber -- which pounds and soothes the brain with the heaviest dubs, the most conscious roots, and funkiest club beats on the planet.

In addition to radio and dubwise music, the doctor's passions include homebrewing beer, cooking, gardening, the Green Bay Packers...and of course my family. 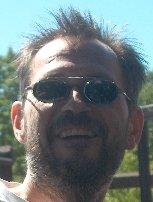 How 'bout a 2-part Echo Chamber in the space of a single 4-hour show? Part 1 took us down to Brazil, where we found Samba, Bossa Nova, '80s-style Pop/Funk, and... Ska, Reggae and Dub! Speaking of which, the shorter Part 2 started out at 5:a.m. in Kingston circa 1962 because this week's EC aired on Jamaican Independence Eve, August 5th! The three Brazilian hours included spins of OBMJ, Bebel Gilberto, Grupo Batuque, CeU, Rita Lee and Os Mutantes (of whom Lee was a member 1966-1972). Part 2, the Jamaican Independence hour, kicked off with Derrick Morgan's independence classic Forward March, and spun Lord Creator, an Unknown Artist (we really should find more of those), Jimmy Cliff, The Folkes Bros. & Count Ossie, and Victor Wong with the Mighty Vikings before winding up with The Bubbles. Then we kept it strictly Yard all the way to 6:a.m. with Delroy Wilson, Tommy McCook, Willie Williams (followed up by Millie Small singing "Poor Little Willie!") and The Upsetters at King Tubby's.