Have a comment, question or request? Call the studio line during our show when the music is playing at 612-341-0980, email us at bonjourminnesota@gmail.com, visit and like page our Bonjour Minnesota Facebook page or on Twitter @BonjourMinn. 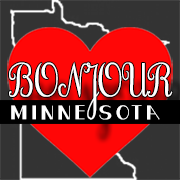