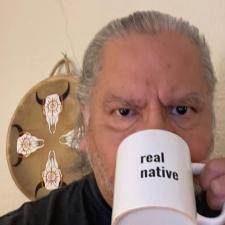 Join Host Roy Taylor (Pawnee Nation of Oklahoma) on Wednesday, August 12, 2020, at 1:00 P.M. CDT as he welcomes back to the program, ROBERT PILOT (Ho-Chunk/WI), and for the first time, LINDSEY WEST (Ho-Chunk/WI).

Join them in KFAI Fresh Air Radio "Studio Stronghold", as they talk about schools re-opening and student, teacher safety in the St. Paul and Minneapolis Public Schools.

Robert Pilot is a secondary school teacher in the St. Paul Public Schools for several decades. In that role he has taught and mentored numerous Indigenous/Native students who are now valued and contributing leaders, advocates and community members.

He is also the founder and operator of, "NATIVE ROOTS RADIO NETWORK', a national radio broadcasting/podcasting enterprise born out of his time at Standing Rock, ND in 2016-17.

Together we'll hear from them, their thoughts on the recent decision by St. Paul and Minneapolis Public Schools to "return" to classes this Fall.

Be sure to listen in for their observations and thoughts of insight and inspiration.

Great-GrandMother Mary Lyons is an Ojibwe elder, spiritual advisor, teacher and storyteller, and advocate for Indigenous/Native Women and children. She has been active on issues such as wellness and sobriety, fetal alcohol syndrome, the Indian Child Welfare Act, environmental protection and Missing and Murdered Indigenous Women.

Mary has traveled, spoken and collaborated extensively. Some of her presentations have been at the United Nations, the World Parliament of Religions and at the "Osceti Sakowin Camp" in Standing Rock, North Dakota. She is also the author of, "WISDOM LESSONS: SPIRITED GUIDANCE FROM AN OJIBWE GREAT-GRANDMOTHER."

A Split show. In the first half: Songs of the People; Indigenous Roots of Black Folk Music. And in the second half a Report from KBGR on Missing and murdered Indigenous women.

Roy Taylor talks with storyteller Dovie Thompson about her upcoming show, How The West Was Spun, at the Open Eye Figure Theater