The Voice of the People

The mission of KNON is to be the Voice of The People in the Dallas area. We provide unique programming to reflect the diversity of the entire metroplex community

The Vortex of Chaos

The Vortex of Chaos is a special blend of various metal styles (and other categories that magically find their way into the dark winds).

Not for feasting have I descended. Graver reasons have called me to earth.

I am Bill Zebub, your guide into realms where angels fear to tread. Metal has many faces. Some of what I will reveal to you will be familiar, but I hope you will discover many new artists.

When I was fifteen years old, a drummer in a local band told me to listen to a particular college radio station. I never knew that metal like that existed. Years later, I attended that college so that I could have a show in the same place that had expanded my awareness of music (not just metal, by the way). I soon became the metal director, and I intentionally stretched out my college years so that I could keep the show, ha ha.

After I graduated, I was told about WFMU by co-workers who had shows on that station (Yes, radio hosts have other jobs). I began as a humble volunteer and became immersed in the artistic culture. My devotion paid off and I was awarded a show. At one time I actually had two shows because there was a strong (positive) reaction to one of my alter-ego characters. He may appear on the Vortex of Chaos at some point.

I recently moved to Dallas. If you haven't hosted a show then you might not know how hard it is to give that up. One day I visited a book store, and a stranger complimented my WFMU T-shirt. He told me about KNON, saying that it has the same spirit as WFMU. I couldn't believe my luck. A common theme in my radio history is that of strangers changing my life with just a few words. Let me be the stranger who will change your life. 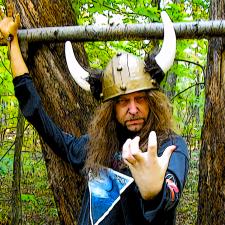