KRFC is a volunteer-driven, non-commercial radio station based in Fort Collins, Colorado that serves the community of Northern Colorado with music, news, and public affairs programming, which can be heard at 88.9 FM and online at www.krfcfm.org.

Choice City Funk is an FM celebration of all things FUNK from a crate digger’s perspective. Monty Pop’s love of punk and rap led to a serious vinyl addiction that found him gravitating more and more to the 70s funk tunes that were the foundations of hip-hop. Monty plays all these records, from the earliest funk of James Brown’s mid-60’s bands to the sample-based hip-hop beats and funk revivalist bands of today. Six decades and six continents of music are represented in each show that spans disco, Afrobeat, MPB, molam, boogie, soul, Latin, jazz, hip-hop, library, rock, and even country music with a funky beat. Tune in Wednesdays at 10 PM to check it out!

Monty Pop aka Monty Popcorn aka Silkie Tassels was born & raised in rural South-Central North Carolina then moved to the Triangle area where he survived the entirety of the Bush and Obama administrations. DJing at the legendary WXYC 89.3 FM for thirteen years and twice serving as its Music Director, Monty developed a love for all recorded sound but fell hardest for the twin genres that not only rhyme but are best captured in the 45 RPM, 7” vinyl format: PUNK & FUNK! Monty has maintained a near-unbroken streak of playing in punk bands since 2010 and is proud to be a founding member of the Triangle Soul Society and a regular at various vinyl DJ nights around the area including One Track Mind, Mid-Century Modern, Big City Lights, Ramblin’ Fever, Steel Chooglin’, and the Shakori Hills Grassroots Festival Vinyl Lounge. Following his partner Emily to beautiful Fort Colllins, Colorado, Monty knew from day one in the Choice City that KRFC was the place to be. 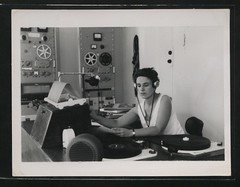