My philosophy as a DJ is "Less talk, more rock!" but you will never hear me say it on air because that is TALKING, not ROCKING! Unless I need to fill some time at the end of a show/hour, I prefer not to talk, not that I am uncomfortable talking to an audience, but Backtracking is about the music, not the DJ playing it. As an avid radio listener decades ago, it would annoy me when a DJ wouldn't identify a song I'd heard, not know what/who it was, and was left wanting to find out. Today all that information is online. If listener wants to know what I have played they can look on-line Spinitron.

It is my goal to bring back to the airwaves FM radio the way it was when I listened to it decades ago; short breaks, long songs, DJs who knew more about the music they were playing than I did, and who could, and WOULD answer the phone. There are hundreds, if not thousands, of Classic Rock stations today, but for the most part they are all streamed from one or two syndicated, automated, leave you nauseated, fat-saturated "music" programs. They have more noise than music, and DJs who have as much personality as cold oatmeal. If you listen to one of those stations long enough you can tell when the song cycle starts over and know what song is coming next. I HATE THAT. You very rarely will hear repeats on Backtracking. That is not what the show is about. If you want that, pay a streaming service.

What is different about Backtracking? I feature an artist/group every week and throughout the show play 2-3 songs an hour from the group. Some of the songs are well known, and others just as good, sometimes better, but rarely, if ever, get played any more. How many times have you heard Pink Floyd's "Wish You Were Here" and were somewhat disappointed the DJ didn't play "Another Brick in the Wall" or "Money" instead?

Because I work at a Community Radio station I don't have quite as much liberty in what I choose to play when it comes to pushing the "decency" envelope. We've all heard commercial stations play the Who's "Who the f**k are you", or Steve Miller's "...funky sh*t going down..." and a few other songs with FCC banned words. I can't play those songs, otherwise, my show is what you'd expect to hear when you tuned into a FM Rock station in 1979. No NOISY ads, (yes, there are occasionally some underwriters - public radio), but NO streaming fees, just Frequency Modulated Rock and Roll, played by a DJ who knows the music and loves it!

W.N.R.Y.T.Y.R.S.D. (We now return you to your regularly scheduled debauchery) 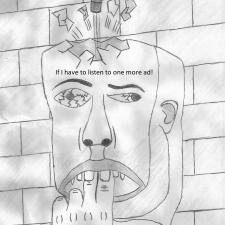 Oldtime in the Rockies

Oldtime in the Rockies