It is my goal to bring back to the airwaves FM radio the way it was when I listened to it; short breaks, long songs, DJs who knew more about the music they were playing than I did. There are hundreds of Classic Rock stations today. For the most part they are all streamed from one or two syndicated, automated, leave you nauseated, fat-saturated (as in overly verbose) "music" programs. They have more noise than music, and DJs who have as much personality as cold oatmeal without sugar OR cinnamon. If you listen to one of those stations long enough you can tell when the song cycle starts over and know what song is coming next. I do my level best not to play a song a second time for at least a year, meaning you very rarely will hear repeats on Backtracking (sometimes I make a mistake - if you want to call it that). The show is what you'd expect to hear when you tuned into a FM Rock station in 1970's, but without the NOISY ads, (yes, there are occasionally some underwriters - public radio), but NO streaming fees, just 58 minutes of Frequency Modulated Rock and Roll played every hour, by a DJ who knows the music and loves it! 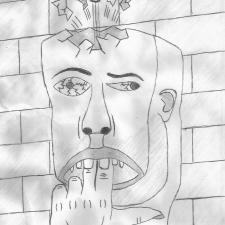