A non-commercial, educational radio station broadcasting and streaming from Pomona College, Claremont, CA. On the FM dial at 88.7 since 1956! 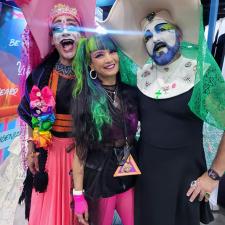 Tonight's show will begin with music by @emit_shapor! "Emit Shapor is Marcus Cotten a musician and visual artist based in Portland, Oregon. The name Emit Shapor is short for saying emitting shape and color. Emit Shapor is a music and visual project where paintings, film/video, furniture, architecture, and other visual components are created to exist with Marcus's music compositions. Marcus has been active as a solo musician since 2006 also recording under the name "Channel in Channel out" most recently for the karaoke Kalk label from Berlin. "Emit Shapor" is the New project from Marcus Cotten. The first album in a series of albums was released in 2019; called "Melodies To Accompany Subsequent Design" (album No.1 in the subsequent design series)."

Lots of new music + cassette giveaway of "Cyberpastoralization" by Androchist

Hi everyone, I'm still getting my studio set up to record shows from home. I've hit several snags but hope to record fresh content for you by the next Synthdactyl Program on April 19th. xoxo