Many Voices, One Station

Tony Russomanno was a radio and TV news reporter for 40 years until his retirement in 2007, but his first experience in broadcasting was to help build and later manage a licensed community radio station when he was 16 years old. It was a happy confluence of his two principal interests at the time (and, he thought, potential career choices), electronics and music education. Despite being a Ham radio operator since he was 14 and having held a FCC First Class Radio Telephone Operator License, the potential electronics career remained a hobby and the idea of teaching music morphed into the reality of teaching current affairs by way of broadcast journalism.

One year after graduating from New York University, Tony was hired by NBC News as a radio reporter in their New York City bureau. There, he anchored and reported local newscasts and reported for the network until recruited to move to California to become co-owner of a statewide radio network. Another anchor stop in radio led to a trip to Guyana to cover the Peoples Temple massacre. His coverage won the RTNDA International Edward R. Murrow Award for spot news as well as the Major Armstrong Award from Columbia University, the first time anyone from an AM radio station was given that honor. Later, he became one of the four original members of the production team on the Peabody and Academy Award-winning feature documentary, The Times of Harvey Milk.

As a television reporter specializing in environmental and technology news, Tony shared a second Peabody Award for coverage of the Loma Prieta earthquake on KGO-TV, spent more than a month traveling among the islands of Prince William Sound during the Exxon Valdez disaster, and was at ground zero at his KPIX-TV Silicon Valley bureau office to report on the effects of the greatest creation and dissolution of wealth in the history of the planet, twice.

Aside from being an early member of the Gay Liberation Front following the Stonewall riots while he was in college, Tony abstained from all political activity until after he retired from journalism. Since then, he joined the Santa Cruz County Democratic Central Committee, served as vice chair, was a California delegate to the 2016 Democratic National Convention, and was recently reelected to the committee’s executive board as well as a delegate to the state Democratic Party. He has lived in Santa Cruz since 1982. 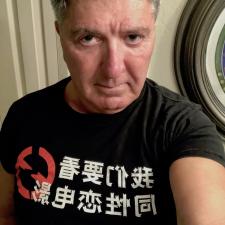