Born and raised in California. Bounced around the country a little. Went to Golden West College in Huntington Beach studying girls and surfing. Did not and would not go to Vietnam. Child of the 60's lived for a time in the Haight. Rented a big house in SF and one of the roomates was Norm Davis, KSAN disc jockey.

My brother was a "roadie" for Quicksilver and I got to tag along to their gigs. Became a Dead Head and had friends that worked for the Dead. Saw lots of Dead and Quick shows from back stage. Traded in my 56 corvette for a Harley. Lived and loved in Marin County. But moved to the Sierra Foothills to get away from the "fast lane". Saved my life. Settled down in Grass Valley but still wanted to be around music. Got involved with KVMR-FM, went to the broadcaster training class in 1982.

Started my first show from 4 to 7am. I called it the "County Line" because my friends from the bay area kept calling and asking why I did not keep in touch and drive back there. It was different when I crossed that County line and found myself in the pines instead of the concrete forests of the SF bay area. I bought some land on a ridge top about 10 miles from town. Became an electrician and started my own business in 1990. It's all about the music! Its all about acoustic and BLUEGRASS music. But radio is what I love, started doing the bluegrass show on Saturday mornings in 1985. The show was posted for almost 6 months and no one wanted to do it. I thought it would be cool to do my radio thing on Saturday at 10 am instead of Friday mornings at 4 am. So I went to the program committee and told them I would do the bluegrass show but I wanted the freedom to do a little "Americana" with it. They gave me the show, but the listeners would not let me play anything but bluegrass and would call me right away and tell me "that's not bluegrass".

Awards given to me for the County Line Bluegrass Show on KVMR. 1. Volunteer of the Year 1996, 2006 2. KVMR Special Projects "Bluegrass Live Remote" 1990 3. Broadcaster of the Year 1998 4. Bill Tuttle Life Time 2006 5. KVMR John Nichols Music Award 1995 Well here I M 22 years later still doing the bluegrass show on Saturday morning and still getting phone calls..... I also pioneered the first "live remote" broadcast on KVMR. I broadcast, produce and direct the California Bluegrass Ass. Fathers Day Weekend Bluegrass Festival for KVMR. Now in its 22nd year! For KVMR I also did the very first satellite downlink broadcast of the Grateful Dead New Years Eve concerts from Oakland, CA in the 80's. I have been on the program Committee for KVMR and served on the board of Directors one term as the board President. Community Radio is the best, and its the only place to get Bluegrass music. And live remote broadcasting is the best radio you can get. It's all about the music. 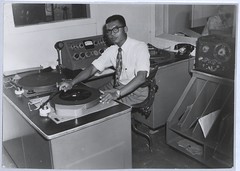