As a child, I was exposed to the sounds of the Big Bands and Top 40 radio by my dad, and what was then referred to as "hillbilly," by my southern mom. As I grew older in Connecticut, I developed my own musical tastes, first by listening to powerful New York AM radio stations and then by gaining exposure to "underground" music, or what might be referred to as "alternative" in today's vernacular. I actually attended Woodstock and you'll see me in the film, the hippie a little off to the left.

In the 1970s I relocated to Berkeley and resided there for twelve years, honing my political perspective and discovering musicians and genres that I hadn't dreamed existed. A job opportunity brought me to the Sacramento area and a Waldorf education for my son pulled me further up the hill, where I discovered KVMR. In short order, I ceased tuning into the mass commercial pabulum and embraced the musical edge I found in this Nevada City oasis.

A graduate of the 2006 broadcaster training class, I am one of three hosts on the worldbeat TransGlobal Sound System, along with Dawn Fischer and Laura Jean, and alternate with Susan Klein on Mondays with the 4-6 PM Music Magazine. In the short time I've been with KVMR, I've expanded my appreciation of musical genres beyond anything I would have imagined. I came to the station with a certain oldies expertise and now feel comfortable with virtually anything. I'm delighted that my two shows are so very different and I devote hours of preparation on each. I tend to weigh heavily on newly released music but not to the exclusion of much-beloved older favorites. If I allot significant time on a particular genre on one show, I'll likely venture into a very different direction for my following broadcast. I may follow a theme or else concentrate on the musical flow ... or both or neither. I often hear people say that there isn't any good music today. My opinion is that they're probably not really listening. I gratefully thank good friend Alice MacAllister for her influence and input into my musical growth curve.

I'm primarily about the music. I'll sprinkle my political perspectives into the songs I play, occasionally speaking on matters of particular interest. One of the greatest things about KVMR is that nobody tells any of the broadcasters what to do. You're listening to real people who are members of a real community. This station is a wonderful example of power originating from the ground and flowing upward and outward.

While preparing playlists as well as in the studio, I visualize the listener I imagine is out there and it's very gratifying to receive phone calls from each of you. Thank you all! 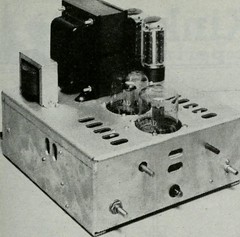