Mixing Indie with Mainstream and Classics with Contemporary music to create a feeling through crossover music instead of a specific genre-based focus, Del brings you the Ineffable Music Radio Show every other Saturday from 10pm-Midnight. Ineffable started every 4th Friday morning from 4-7am, then moved to every other Monday morning in the same time slot, and has now landed in its permanent time slot.

Del specializes in conscious music with themes of Social Justice, Equality, life as LGBTQ+, and both Personal and Social Revolution. Del has been part of a rotation of DJ’s on the JukeJoint, a full-spectrum blues program on alternating Sunday mornings from midnight to 4am and has been the host of a once per month Sunday morning Redeye show, The Journey-Redeye Radio since 2011, and co-host of the Blues Café from 2015-2017, as well as host of the occasional Sunday Showcase with Poetry and Music specials. Del looks forward to producing more specials and collaborative shows in the future.

Del came into broadcasting via the backdoor of volunteering, first joining the program committee as a community member. Since then, they have enjoyed working in outreach, the music library, on and at events and now serves on KVMR’s Board of Directors. Del appreciates the sheer diversity of programming, commitment to free speech, and independent news that are so unique to KVMR. Del feels that KVMR is a community beacon of resources, and is proud to be a part of this incredible group of people. KVMR has become an integral part of Del’s life and an anchor to this incredible community. 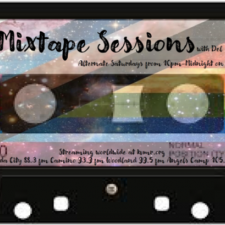 The Mixtape Sessions- Be Ur Own Valentine Edition

The Mixtape Sessions- Be Ur Own Valentine Edition

Honoring the memory of Del's radio Mentor, proprietor of the Blues Cafe on KVMR, Lil' Angel B.

The Mixtape Sessions- All About the Love Rerun

The Mixtape Sessions- All About the Love Rerun

The Mixtape Sessions- Let it Out Edition

The Mixtape Sessions- Let it Out Edition