Screamer was KWVA's first-ever Music Director, helping build the station's original music library and getting the station on air on 88.1 FM in 1993. Metal Madness was one of KWVA's first two specialty shows. "Metal Madness" and "Stone Zone" were launched on the same weekend in 1992. Before coming to KWVA, Screamer was a roadie for Rock Bands on LA's Sunset Strip and worked at a music marketing firm in Hollywood. In the late 90's and 2000's, he produced the music video show "Hard Times." Hard Times won a Billboard Music Video Award for "Best Hard Rock Video Show" in 2001. At its peak, Hard Times aired on over 100 stations across the country in syndication and on the America One Television Network. Screamer brings his knowledge and passion for Hard Rock and Metal Music to every episode of Metal Madness! 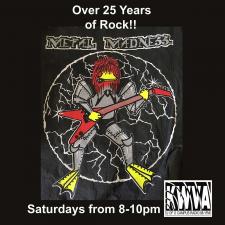