Gregory James Gonzales is a weird dude, but it's okay. He's harmless. It's just that his brain's been baking in Tucson for about 27 years, with little reprieve. Greg was born in Simi Valley in 1991 and his family moved to Tucson shortly after. The desert has been his home ever since.

He found his love for radio at the University of Arizona around 2011, when he joined KAMP Student Radio. He served as a DJ, music reviewer, and world/jazz music director, simultaneously writing and editing for the Arizona Daily Wildcat. His work in Student Media earned him an award, "for wearing many hats," as former director Mark Woodhams put it. But after he graduated in 2013 with a degree he designed — The Human Condition and Existential Problems: Philosophy, Religious Studies, Creative Nonfiction — Greg knew he'd need a new home. He also knew exactly where to go.

By 2014, KXCI was his new outlet. After shadowing on The Home Stretch with Cathy Rivers and subbing for shows like Mele O Hawaii, Greg got a DJ spot on the Early Morning Music Mix every Wednesday. Since then, he's been waking up at 4am on Wednesday mornings, barreling down Aviation Highway to downtown (with a record of 7 minutes from home at Golflinks and Kolb to the station) to prep the mix and stay on from 5am-7am. You'll probably hear JJ Grey and Mofro, Doves, Bad Religion, Michael Franti, Pipelights, Matisyahu, Golden Boots, and Ultimate Spinach, but Greg likes to keep the mix fresh. Sometimes it's heavy on reggae, and other times it sounds punky and inspired by Tony Hawk's Pro Skater games. Even if some songs aren't your cup of tea, you're sure to hear something that'll get stuck in your head for the week.

In his time outside the station, Greg writes for local and national publications. Here in Tucson, he sometimes contributes editing and writing to the Trial & Error Collective music zine, and his regular work is at Gourmet News (a national trade publication for specialty food retailers). He loves hiking, skateboarding, wandering the city streets at night, and traveling. If you're out and about, you might find him scribbling in a little black notebook at the end of the bars of Bisbee, Tubac, Mammoth, Ski Valley, Prescott, Pinetop — or wide-eyed and stuffed with cheese at a trade show in one of the big cities. Wherever you find him, he'll probably buy you a drink in exchange for your best stories. 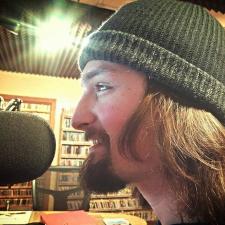