This brash young man was known in almost no circles as Cyrano. He assumed the name less for his Gallic heraldry and prominent proboscis and more for the ability to speak his heart through the words and sounds of others. Was he an intellectual cannibal and musical counterfeiter? Was he a shrewd selector and distinct arbiter of sinister, sleazy, 60’s sock-it-to-ya sounds? The jury is still out on those questions but one thing was for sure:

KXLU had become the beautiful but dull-witted Christian whose mouth would speak Cyrano’s intentions to his fair city. Yet his whispering was done not from nearby shrubbery, but from a duct-taped microphone. The passion and the poetry in his soul found sanctuary in the tunes of Irma Thomas, The Meters, The Skatalites, Willie Bobo, Ennio Morricone, Charles Mingus and Martin Denny. By connecting the dots like tropical constellations of funk, he furthered the work of his mentor and swizzled up a deeply satisfying, hip dropping concoction.

With only 3000 watts of love to give, his method of administration holds firm at two unreliable turntables and a mixing board sticky with Vermouth and candle wax. 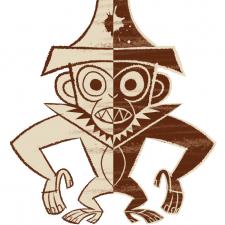