With A Fistful of Vinyl

A Fistful of Vinyl (IG: @AFistfulOfVinyl) is a radio show and youtube channel started by Alec Hodgman in 2011. Since then, Alec and his rag-tag team of volunteer contributors have filmed, recorded, and interviewed hundreds of bands and shared their art. A Fistful of Vinyl focuses on the authentic side of the artists and DJs, proudly championing their strengths and weaknesses in a celebration of being human.

Over the years, A Fistful of Vinyl has teamed up with Julian Casablancas of The Strokes/The Voidz, Pat the Bunny, Erik Petersen of Mischief Brew, AJJ, Anti-Flag, Jeff Rosenstock, Ignite, Harley Poe, Hobo Johnson, Frank Turner, The Homeless Gospel Choir, Matt Pless, Laura Stevenson, Days N Daze, The Specials, Titus Andronicus, Ceschi, Bat Country, Stick and Poke, Against Me / Laura Jane Grace, and many others. At time of writing, A Fistful of Vinyl has over 350 videos and more than 20,000 subscribers on YouTube, responsible for over 8 million views.

A Fistful of Major Minor Key

Isn't it wild how just sounds reverberating a certain distance from one another can create feelings within us, almost innately? Perhaps it's a very western perspective, but I'm fascinated by the tone that music conveys - at times it's more impactful than the words themselves. You ask a randomly selected focus group of children 10 and under, they will think that a song in a major key is happy, and a song in a minor key is sad, independent of the lyrics. So what happens when a song that's famously in a minor key "Smells Like Teen Spirit" and put it in a major key? Well, you get one-part Third Eye Blind, one part The Theme From Friends, and one part "Jesus is a Friend of Mine" level ska. It's weird hearing it this way, recognizing it and it feeling alien at the same time, and trying to reconcile with knowing the ultimate fate of Nirvana. Or maybe it's just another silly YouTube, like that one that speeds up 2% every time Rebecca Black says "Friday". That must exist, right? I mean, it's the internet. If it doesn't, go make it and reap those sweet sweet youtube views.

Found it. It's maddening. https://www.youtube.com/watch?v=RsVCJTPW1AQ 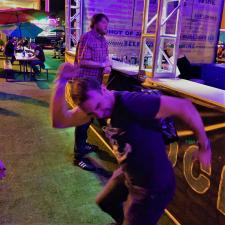