A Lincoln native, I earned a degree in journalism at the University of Nebraska-Lincoln in 1984. The Lincoln Journal Star employed me for 14 years, reporting on Lincoln city and county government, neighborhoods, transportation, historic preservation, the arts and dining. Later I wrote for and edited publications and managed websites for Humanities Nebraska (then known as the Nebraska Humanities Council), the Berman Music Foundation and the American Historical Society of Germans from Russia.

After serving a 25-year term as the Mayor of "NightTown" from 1993 to 2018, I stepped down for five months before getting the call to return for an afternoon jazz program. It's a jazz groove, a blues groove, a soul groove and more. It's "The Afternoon Groove." Since February 2012, I also have hosted "Jazz Currents," Saturdays 7-9 p.m. Central on NET Radio, Nebraska's NPR station. 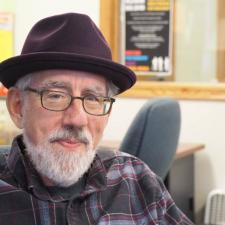 Celebrating the day with music by Hanks Jones, Crawford, and Mobley and by Franks Sinatra, Wess, Vignola, Capp, Kimbrough, Morgan and Zappa

Uberjam: A mix of jazz, funk and fusion

Soul and Funk with Josh Hoyer

Josh Hoyer is my guest as we feature music from his latest release with his band Soul Colossal, plus Electric Soul Method, the Shadowboxers, Maceo Parker, Booker T. Jones, Jeff Coffin & the Mutet, Pucho & His Latin Soul Brothers, Dumpstaphunk and more.

Fall Fund Drive featuring artists with ties to Lincoln, Omaha and beyond.

Artists of the 2022 Monterey Jazz Festival

Blues with a jazz twist and jazz with a blues twist, including music by Miles Davis, Dinah Washington, Dave Stryker, Gene Harris and more.