Bill’s radio career dates back to the 70’s while hosting late night free form “progressive underground” and top 40 shows on AM and FM stations in Norman, Tulsa, Broken Arrow and Lawton, Oklahoma. In 1984 Bill moved to St. Louis to continue a career outside of radio but in 2016 he found his way back to radio as a weekend member of the original ROOTS air staff.

Since 2018 Bill has been doing weekends at St. Louis’s K-WULF 101.7fm, Rock and Americana format. Bill really enjoys the ROOTS Free Form Album Rock format which allows for the creativity that was enjoyed years ago. When not working at radio Bill enjoys spending time with his wife, Judy, their adult children and grand kids. In addition you can always find Bill browsing used record shops or guitar stores as he continues to add to his collections.

Bill is thrilled to back at the ROOTS on Saturday nights playing the greatest music ever recorded! 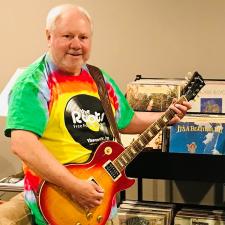