You will probably see Jim around the station wearing a T-shirt or sweatshirt with either IU or UGA on it. That's because, although he is an alumnus of The University of Georgia in Athens (and an avid Dawg) where he earned a degree in Radio-TV-Film, his first college experience was right here in Bloomington where he spent a couple of weeks each summer after his Jr and Sr, HS years in McNutt dorm as a delegate to a national conference. He has been a volunteer at WFHB since 2019, co-hosting Wednesday's Morning Music Mix show with Chuck Beckett and rotating as host of Saturday's Roots for Breakfast. 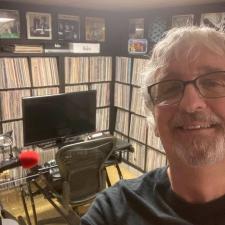