Survivor: Broadway in the '80s 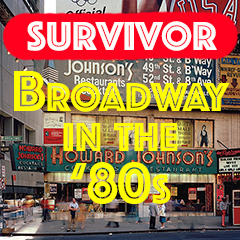 New York City was a mess in the 1980's. Broadway attendance plummeted. Some predicted the end of the American Musical. In spite of all that, a few blockbuster musicals emerged during that decade and saved the Great White Way just in time to make its historic turnaround in the 1990's.

With Broadway attendance figures and revenues constantly setting records in the 21st century, it's hard to imagine that just 30 years ago we almost witnessed the end of this American art form. New York City's most important tourist destination is the Broadway Theater District, the blocks surrounding Times Square that house 40 Broadway Theaters and many more smaller venues. But in the 1980's parts of the city were riddled by crime, filth, and decadence. The Times Square area was among the worst.

42nd Street was home to pimps, prostitutes, panhandlers, peep shows and hustlers. Garbage tossed on the street, urine puddles on sidewalks, derelicts living in boxes and street crime was part of the vibe. Tourism to Broadway dropped. Families would not come. It seemed only the stalwart theater aficionados ventured to shows. Get in, see a show, get out. As a result producers were not funding new works to the degree they had. New shows, especially the more expensive musicals, were disappearing. Some predicted that the American Musical Theater had taken its last gasp.

Fortunately, that was not the case. In spite of all the obstacles many of Broadway's most enduring new musicals opened during the '80s. There were also the revivals. However, there were many musicals most people have never heard of that were nominated for Tony Awards. There simply were so few to choose from that the Tony Committee had to find something to fill the slots. Musicals with titles like Tintypes, Grind, Merlin, Quilters, Starmites, Romance/Romance and Big Deal were all Best Musical nominations during the decade.

But there were also brand new musicals that proved creativity in musical theater was alive and well. Here's a sampling of the best: 42nd Street, Nine, Cats, La Cage aux Folles, Les Miserables, The Phantom of the Opera, Sunday in the Park With George, Into the Woods, My One and Only, Big River and Dreamgirls. Audiences supported these shows and kept the lights burning.

On this edition of Broadwaty Bound we salute the '80s musicals that held down the fort for more than a decade providing reason for the Broadway Renaissance of the 1990's that continues to this day.