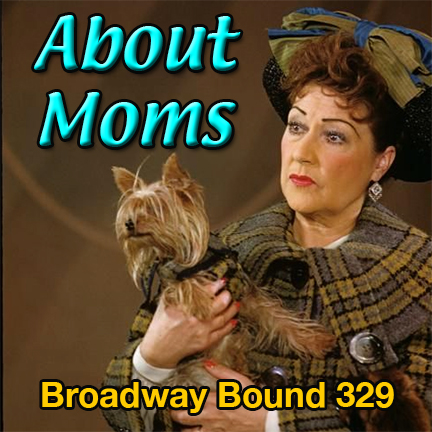 Broadway is fertile ground for songs about mothers and their lives as wives, caregivers, protectors, and doing the best they can.

So who comes to mind when you think about the character of "mother" on the musical stage? Mama Rose? Golde? Kim in Saigon? The resigned mother who lives in Fun Home? Maybe Mama Morton who runs the jail in Chicago? Or might be Anna with the King?
Sometimes happy, sometimes not. Mothers and their children develop many kinds of relationships on stage. This all about them.

And the Oscar for the Best Song written for a film goes to...

Since the category of "Best Song Written For A Motion Picture" was first established in 1934, some of our most beloved songs have come from the movies. The Continental was the first song to receive the Oscar. For the next 80+ years hundreds of songs have been nominated for the award. The Academy voters pick the winner. But the many of the nominated songs are considered even better than the "winners." In this edition of American Jukebox we look at 29 songs from the movies, both the winners and the nominees. We start with Never On Sunday, "Best Song Oscar" winner in 1960 and work our way through the '60's , '70s, '80s and '90s.

A few musicals, a dozen or so, have been life-changing, mind-blowing shows. Their impact is profound. This is my list. What's yours?

When you're in the theater and suddenly you say to yourself, "where am I?" you have just been transported to that magic place by the confluence of many theatrical elements that make the living stage sometimes breathtaking. I say sometimes, and perhaps even most of the time you may enjoy a show, but it's not life-changing.

On this Broadway Bound I offer my list of 12 musicals that have had a profound effect on me. The oldest is from 1969. The newest is from 2017.

This is my list and is incomplete due to to time constraints. But rest assured, these shows only rarely come along. Spoiler alert. Here they are:

You're the Top: Broadway Superlatives

Records are set on Broadway: Biggest, most, best, longest, shortest. They're "tops" in their class.

A look at the "record setters," that is, Broadway musicals through the years that set records in one way or another. Some records are for highest grossing musicals, or longest time to sit on your seats to watch the show, or the biggest financial losers, or the longest running shows ever. My two favs are for "highest ticket price" sold at the box office ($998), and the highest average ticket price ($506) for a Broadway show – this is a real surprise.

You'll probably know some of the records they've set but I guarantee you'll be surprised and stunned by others.

Our democracy was invaded by domestic terrorists on January 6, 2021. We witnessed in unbelievable, vivid detail just what they were up to and what they hoped to achieve. Like most Americans I was shaken to my core. This program is dedicated to Our American Story, imperfect though it is, we strive to form a more perfect union.

The music here tells our story in joyful and sometimes harsh ways.