The Snake on the Lake

Student Radio at the University of Wisconsin-Madison

The guiding of careers as been a major highlight of Bruce's professional life. As an A&R executive at Capitol Records, he was responsible for the acquiring and developing such artists as The Knack ("My Sharona"), Duran Duran, Iron Maiden, Missing Persons, The Motels, Weird Al, and Thomas Dolby ("She Blinded Me With Science"). He was also primary U.S. A&R contact for Kraftwerk, Red Ryder, April Wine, and Delbert McClinton. "Sharona", of course, was the #1 record of the year, and Bruce created a special release for "Science" given that Dolby didn't have a full album ready at the time the song was recorded. Bruce continues to consult rising artists on career issues, song selection, and their live shows, and he's taken on management of the rising LA-based alternative band Trapdoor Social. See the next section below for examples of newer artists that caught his ear early. Ravid & Associates was his successful executive search firm that placed sales and marketing execs into corporations, using many principles consistent with A&R and business in general. Ravid & Associates is available to undertake US and European retained search projects in entertainment or technology.

Go Deep With Bruce Rave is a syndicated new music program that currently airs on three stations. The music focus is on deeper tracks from bands already being played, along with melodic indie groups who are one step away from mainstream exposure. Bruce has continued his track record of having an accurate crystal ball. In earlier years, the Rave's Raves blog featured early picks on bands like Muse (1999), and Arcade Fire. With his show, 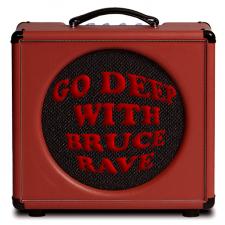