With the exception of requests and tributes there are no repeated artists aired on this show. 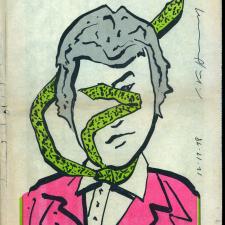 Shoot Out The Lights: The Final Pulsebeat Show -

10,000 Songs Without Repeating An Artist

First hour is a tribute to Athens/Atlanta, Georgia 1980-1989. This was inspired by "Cool Town: How Athens, Georgia, Launched Alternative Music and Changed American Culture" book by Grace Elizabeth Hale and partly informed by Susan Murphy's "Athens Music - The First Five Years on WUOG, July 4, 1983" (https://soundcloud.com/susan-v-murphy). Between these two sources and several compilations on Discogs.com, I found over 60 bands not previously aired on Pulsebeat and whittled it down to 22 songs. The first 20 minutes features artists more closely related to the postpunk sound or bands like Pylon and Method Actors. The next 20 minute set is more of the mid-80s college, jangle rock sound that defined the city and college radio all over the USA. The last 20 minute set features side projects of the members of R.E.M.

The End of the Deepest Dive

Pulsebeat began in February 2015 with the aim of playing UK-centric post-punk artists from the late 70s to mid 80s. I started with a list of approximately 100 bands from this era and after a couple weeks that list doubled. I decided not to repeat any artists until I finished airing every band on that list. But as I kept researching the list kept growing. Within a few months I had enough material to never repeat an artist for for the rest 2015. At this point, the show expanded to encapsulate every underground genre you would have heard on WZBC from 1977-1989 (our strict cut-off point). By the end of 2015, I was just over 1,000 songs and decided to keep this "no-repeated artists" approach going until I hit 10,000, which is where we finally find ourselves tonight over 7 years later.

While I was aware that UK/Australia/NZ, Netherlands and Germany had vibrant postpunk scenes, I never suspected the amount of material I would find from places like Greece, Yugoslavia, Brazil, Hungary, Austria, Japan and Italy. Stateside, the city scenes you always read about - Boston, NYC, DC, Athens, Chicago, Cleveland, Minneapolis, Dallas/Austin, LA, SF, Seattle, Vancouver - upheld their reputations as fertile ground for experimentation. But it was always more intriguing discovering bands from Iowa, West Virginia, South Dakota, Alabama, - places cut-off from record stores, college radio, zines or anything resembling a sub-culture.

You can view every Pulsebeat show here: https://spinitron.com/WZBC/show/735/Pulsebeat I saved recordings of every show and hope to archive these online in the near future.

This week's show features all underground bands from the US with an unintended emphasis on Minneapolis. The first 1/2 hour leans towards postpunk and new wave. The second 1/2 hour focuses on what was a significant western/cowpunk/rockabilly sound in the mid-80s. The second hour has experimental/jazz/avantgarde meets punk then female fronted new wave then male fronted punk and debut releases by proto-grunge(ish) acts Screaming Trees (RIP Mark Langean) and The Fluid.

This show also marks the 7 year anniversary of Pulsebeat. As the show description confesses we spin all underground genres from the late 70s to 1989. Since the first show, we have NOT repeated any artists. Tonight's show brings us up to 9,586 unique artists. Pulsebeat will go off the air when we hit 10,000, in approximately 9 weeks ( May 1st, 2022).

End of the Ear

We end off 2021 with an arduous but left field listen as we cull from several mid-80s tape compilations emanating from France, Germany, Italy and Poland. It's a no-return-to-the-surface deep dive in home-made industrial, Euro avant-garde, experimental tribal rhythms, hissy cassette synth, some Italian garage rock revival and a Cure cover. Truly the darkest week of the year,