Reverend Billy Talen is a longtime New York City performer. His ministry began 20 years ago when he founded with his partner Savitri D, the funny-but-very-serious “Church of Stop Shopping.” Often accompanied by a 35 voice choir, Billy has championed “Buy Nothing Day” – his version of Black Friday. His quest to reduce America’s consuming (and the pollution that it puts in the air and water) took Billy, Savitri and their Stop Shopping Choir to four continents, from the UK and Europe to Burning Man to Australia to Kenya to Los Angeles. With Savitri directing the performances, the troupe has won the Obie, Alpert and Edwin Booth awards. Grammy and Tony winners sing in the choir, which is a go-to ensemble for talented artists who want to sing against consumerism and its danger to the planet. The Stop Shopping singers have opened for Neil Young in his tours, and share the stage with Joan Baez, Kurt Vonnegut and Rollerena. Now, as the world suffers the flames and wind and waves of a the climate apocalypse, Reverend Billy and the Church of Stop Shopping bring their message against consumerism in this weekly series. 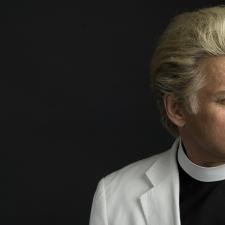