It all began in 1971 but, I don't really count those days as I was in the learning process and my first job, found me playing Sinatra, Dino,Ray Coniff, Johnny Mathis, Percy Faith Etc. I literally was run out of Fulton, Mo. by the former sheriff. Needless to say, I left a cloud of dust in my rear view mirror and headed home to St.Louis. In my mind, it really all began at K-SHE in March of 1973. I began programming radio in 1977 and have done so ever since. Remember WMRY?

In 1980, I landed at the legendary KMET in Los Angeles, working alongside some of the biggest names in the business. Mary "The Burner" Turner, Jim Laad (now on Serious XM), Jeff Gonzer, Paraquat Kelly, Ace Young, David Perry, Cynthia Fox, Chuck Randall and Dr. Dimento with Weird Al Yankovich.

When the opportunity to program The Roots arose, I saw the opportunity to resurrect "the old K-SHE". Free form and playing thousands of cuts, not hundreds and not just the rock genre but Blues,Jazz Fusion, Country Rock, Folk and so on, I jumped on it. 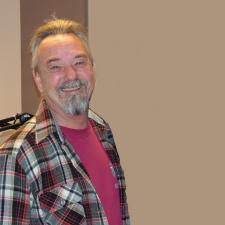